twilightsagaaddict wrote:I think this has been asked before, but I couldn't find the thread. Had a question about Breaking Dawn: (SPOILER ALERT!!) on pg 381, as Bella is coming around after her transformation, Edward answers Carlisle's unspoken question with "No, I'm staying right here. They'll sort it out." "An interesting situation," Carlisle responded. "And I'd thought I'd seen just about everything."......."I'll deal with it later. "we'll deal with it later"..."I don't know which side to take. I'd love to flog them both....." "I wonder what Bella will think-whose side she'll take"....

I'd just pictured that Jacob and Roslie were fighting over the imprinting. Roslie taking on such a motherly/nanny role in Renesmee's life versus the shapeshifter who now desires to make all of Nessie's dreams to come true.

I agree. So, which side do you think Edward did take? We only really saw Bella get angry. Edward didn't comment on it much at all. I think they all ended up being OK with it, but does everyone think Edward was initially angry with Jacob or understanding?
Top

I think Edward was way to wrapped up in Bella's transformation to really focus on the imprinting, but yes, I think he was annoyed with Jacob. I got the impression while reading that Edward wasn't thrilled...imagine, the guy who tried to steal your wife away now is head over heels for your daughter?? It had to be weird for him, even with all his understanding of thoughts and everything. I think because he could read JAcob's thoughts and knew 100% that it wasn't a choice for Jake, and that Jake's love was pure for Nessie...Edward could let it go, but I think he was definitely not all for it.

TeamEdward1918 wrote: You're right. Was Bella in the "after" car when she went to see Charlie? I remember in the beginning of BD she was embarrassed of her "before" car, but realized that she really couldn't even be seen through the tinted windows. So maybe she drove there in a more inconspicuous car with tinted windows to go see him....? Doesn't seem like she was trying or even remotely worried about hiding though....hmm...

When I read this over I found myself replying outloud... So maybe it is interesting enough to share...

I'm trying to remember if it was in MS but I believe while he was looking for Bella in Port Angeles he talks about all the Cullens cars having tinted windows. So wouldn't Bella's after car have them as well...

I just finished re-reading MS on Meyer's website. I don't recall reading there that ALL the Cullen cars were tinted. I think all of them would be tinted, since they are uber-cool vampires haha

But I think some are more than others. Carlisle car has a darker tint for sure, hence him making Alice and Jasper take it in Twilight when they fled to Arizona with Bella to protect them from the sun and heat there.
Team Edward: Cos I love stupid shiny Volvo owners

For sure, Carlisle's Mercedes, Edward's Volvo, and Bella's Guardian had tinted windows. (The Mercedes is mentioned in Twilight; the Volvo in Midnight Sun; and the Guardian in Breaking Dawn.)

This leaves Edward's Vanquish, Emmett's Jeep, Rosalie's M3, Alice's Porsche, and Bella's Ferrari. I suppose it would make sense for them all to have tinted windows.

haha Jazzy, "uber-cool vampires" they so are!

And agree that they probably all have tinted windows, don't know why that never occured to me, lol
I am a Twilighter with OCD
"I squared my shoulders and walked forward to meet my fate, with my destiny solidly at my side" 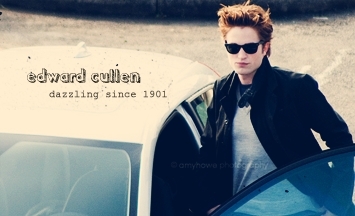 I have two questions:

In Twilight the Cullens play baseball. When they are doing so, the ball is thrown at light-speed and is hit with enough force to create a sound like thunder. Wouldn't hitting the ball with such force cause the bat to break?

Another thing is that if in Breaking Dawn, Bella can hear a radio frequency miles away, wouldn't the loud noises made by the bat hitting the ball in Twilight damage to the Cullens' eardrums?

I have no idea to the first question, but the second one I do have an answer to.
Vampire's essentially can't break at all, their hearing and ears will be completely fine no matter what happens. The only thing hard enough to hurt them is another vampire, or werewolves.

I don`t know any answer to the first question.

The second answer would be
No, vampires don`t really get hurt not even in a car accident, so even a very loud noise is not bothering them. The only way they can get hurt is if they do it to each other.