Tell us what was your reaction after seeing the movie.

everyone laughed when Edward smelled bella--- i laughed.. he looked like he was going to puke.

some of it was cheesey- but tolerable for me.. i laughed when it was appropriate to for the cheese.
Keeper of The Randomness

I am so happy with the movie. I think they did a great job of condensing the book into 2hrs.
I wish there would have been more of the Cullens b/c the actors were so great as their characters, I just couldn't get enough.
Also, I hadn't expected much from the human roles, but they were fabulous and hilarious.

I can't wait to see it again

Lynzeee wrote:everyone laughed when Edward smelled bella--- i laughed.. he looked like he was going to puke.

some of it was cheesey- but tolerable for me.. i laughed when it was appropriate to for the cheese.

I actually pictured Edward's first reaction to Bella's smell was a little much. When he grabbed him nose and mouth and never ever picture Edward doing that. I just pictured a stone cold horrific expression and a bunch of gitters and shakes. Mostly because, in the book, Mike commented to Bella about how mad Edward looked next to her and what she did to make him mad.
J<3N
Q: Who's your favorite vampire? Edward Cullen or Bill Compton?
A: Well, Bill has quite the...uh... I'll just say Bill is my favorite for undisclosed reasons...

oh it was over the top! but still- i liked it, him holding his nose was too much- but i dunno i laughed- i didn;t hate it!
Keeper of The Randomness

I liked the movie, but some of the dialogue seemed random ... like maybe the first half of a conversation hit the cutting room floor. For example, when Bella got in the jeep after the baseball game she assumed James was going to hunt her. Where would she get that idea until someone told her? I think maybe Catherine tried too hard to put exact quotes from the book into the movie. That made the dialogue seem erratic, sometimes.

I loved the acting. Rob was more believable than I thought he would be. Kristen was perfect. I think they did a good job of condensing the story, overall. I loved the ending with Victoria! I had a hard time even recognizing Christian Serratos! The sparkling in the sunlight was amazing! Over all, a good representation of the book; I can't wait to see what they do with New Moon! I wish the movie had lasted another hour!
"Where there is great love, there are always miracles."
Top

I'm going to start by saying that I loved the movie, which is why I've already seen it twice.

I thought the beginning was a little choppy, like these were the first scenes filmed and the actors were just starting to get into the groove of things, and that the transitions between some of the scenes could of been a little better. But with that said I wasn't looking for perfection.

The movie was able to capture what Twilight is all about. The trivial stuff like where a certain line was said that was different from the book or the places that were added/changed were just that trivial. Did the actors look and sound believeable when they said the lines in the new locations?

The actors did a phenomenal job.
Rob is an excellent Edward. The initial haters should really feel ashamed of themselves. He was just...Delicious

Kristen was...well what can I say I never doubted her ability to be Bella. She gets a thumbs up from me.
Billy Burke made me like Charlie more now than ever before.

--I loved charlie and Billy's attempt at youth lingo. It cracked me up.
--I love when Bella accidently opens the door into Jacob and knocks him around a bit.
--The Vollyball scene was hysterical. I loved it.
--Emmett is carring Eggs into the cafateria - WHY!!!!
--There are also eggs on charlie's table when they are waiting for Bella to come down dressed for prom.
--I didn't notice the music the first time I had seen the movie as I had not listened to the soundtrack.
--I now notice most of the songs and Bella's lullably throught the movie. I liked it.
--Jasper's faces make me want to pee my pants.
--I did not notice anything weird about the black eyes. Someone said they looked photoshopped. I din't notice. I noticed the golden contacts less the second time I was it.
-- I Love the science teacher!
--Rainere Beer... only local Seattlites know about Raineer beer which used to be a HUGE production plant in Washington (taken over by Tully's Coffee) but Raineere Beer is very Seattle. We have Mount Raineere...
--Bella eats A LOT of vegetables and there were apples everywhere.
--Sea whips on the washington and oregon coast are fun to play with. they are not living creatures.
--I still don't like Sam. Timble. Blech!
--The waitresses hair in the resturant was HIDEOUS
--- did I mention I took notes during the movie???---
--Rob lips are absolutly beautiful. I could kiss them. They are delicious.
--Rob and Bella in the rain... Bella was dry and Rob was dripping. Maybe they decided this is the only way to clean Rob, but I loved a wet Edward.
--The glittering in the sun was better the second time. I would have liked a more dynamic in your face glitter, but it was subtle and okay.
--Rob produced that adorable crooked Edward smile and that made me happy.
NOTE: Do not go pee during the movie. You will miss something!!!
--I loved the Baseball scene... more the secod time than the first.
--Bella did not pay the very american lunch lady looking cab driver... that was odd.
--The fight scene, in my oppinion kicked Butt!!!!! I loved the action.
--I noticed the second time that Bella'slullaby was everywhere.
--Edwards room was a mess... that was a little weird.
--The Cullen family was delightful.

I LOVED the movie!!!

Could it have been better? Absolutely, but given the budget they had to work with, they did a great job with the material.

Wow.
I really enjoyed it. I was like a 5 year-old learning how to ride a bike with out training wheels for the first time. I loved how it was so similar to the book. But what i loved the most was how different it was. I thought i would be upset that it wasn't Twilight the Book: The Movie. They had alot of the same diolouge but went about it in a completely new, different, cool way. It's the differences that make the movie that much better. There was a lot of laughing and i loved it when everyone, including myself, gasped at parts that we knew were coming. Overall, i loved the movie and I'm going again in two weeks to see it. I can't wait for New Moon. 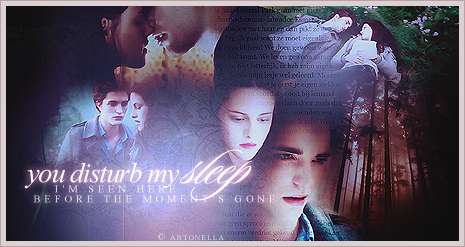