I believe I asked a similar question earlier.

The general concensus from that was: Jasper wouldn't need to. Alice already loves him, and we believe she wouldn't want to be manipulated that way.
Top

The general concensus from that was: Jasper wouldn't need to. Alice already loves him, and we believe she wouldn't want to be manipulated that way.

Oh, I did read back a bit, but not that far. Soz for asking again 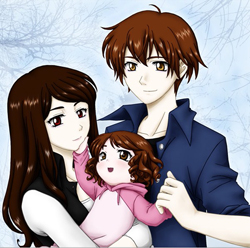 Oh- don't be sorry. I was just stating it, wasn't attempting to chide you or anything. /patpat

It's kind of hard to sort through all these questions anyway.

tpam 2 above me i love ur banner

okay i love alice and jasper probs cause theyhave the best powers and i love alice... who will take jasper hostage soo i can have alice?? poo shell see us doing it!!
APPC~Party Manager.Leo~Volturi

One of my most favorite things about Jasper and Alice is the way that, when talking to someone else, Jasper is quick to point out how well Alice can defend herself. Case in point--"I know you worry about her--I want to show you why that's not necessary." Yet, when it comes down to the fight he becomes an "overprotective fool" and tries to make sure she has nothing to do. She's the light of his life, his soul, his only reason for being and he's her first memory, her motivation, and her rock. The two are perfect compliments of each other.
Left my heart on the Gen Y thread....<3 my Lexily!
How could anyone say no to this face? Awww....

okay i love alice and jasper probs cause theyhave the best powers and i love alice... who will take jasper hostage soo i can have alice?? poo shell see us doing it!!

I WILL!!! I'll take Jasper hostage. Hmmm well to avoid her seeing us doing it we should take a page from Victoria and Riley's books and keeping changing our minds. So Alice will only see flickers and will get confused and then we can have what we want. Awesome plan yea? I really love their relationship. They don't show off, but you can really sense the love coming from them.^^
And I can picture the Cullens when they first saw Alice and Jasper - it must have been kind of creepy - "Hi everyone. Edward, would you mind if I took your room? Oh, I see, You won't ." xD

Do you think that Jasper's classmates were extremely motivated because of his talent? I don't think that he would worry about THAT if he were thirsty, but it would make the lessons less boring...xD

I love Alice & Jasper's relationship. They are such a cute couple & even though they don't display it as openly as Emmett & Rosalie w/pda you can tell & see how much they love each other & care for one another. (Which in my opinion is a good thing, I'm not a fan of pda!

) Even though Jasper has a hard time w/the vegetarian lifestyle he does it because he loves Alice soooo much & would follow her anywhere. And I thought they portrayed their relationship wonderfully in the movie. They are such an awesome couple.

Since Alice and Jasper is my fave couple in the saga, I read all 23 pages of posts in this thread

- Earlier on I think someone asked how long between Alice becoming a vampire / seeing Jasper in a vision, and her actually finding him in that diner. I think it was about 28 years. I always wondered what Alice did all those years before she found him. Did it take that long to find him? Or was she just waiting all those years, until the time it was FATED for them to meet?

Soooo many questions I have about my fave couple! I hope SM explains it all in the official guide. I want to know what they did for the 2 years before they found the Cullens too!!!

Alice and Jasper are my favorite, too! Good questions.

1. In the PC, SM explained that Alice does not usually wait for her visions of the future to happen. She trusts her visions and if she sees something, she decides it is going to happen and there is no reason to wait around for it to happen, so she jumps forward. I hope that makes sense...SM explained it better. The example SM gave was Bella. Before Edward had even realized he was in love with Bella and wanted to be with her, Alice saw her as part of the family. So, a bit prematurely, Alice decided they would be close, wanted to befriend Bella, and got upset about the possibility of Bela getting hurt or dying (in MS). I imagine it was the same with her vision of Jasper--she decided they were going to be together and jumped forward, looking for him and waiting for him anxiously. So, I think it took that long to find him basically. I can't picture Alice patiently waiting.

2. I don't think they got married right away. I agree with what you said--Alice would have wanted to plan a wedding, which requires people. She also saw the Cullens in a vision and would most likely want her future family to be present. And, Jasper seems pretty traditional. I think he would want their relationship to develop and he would want to get her a ring and everything. I don't see either of them wanting to elope or have a quick, private wedding.

3. I have no idea where the Cullens were living, but I really doubt they were in Forks. They can't stay in 1 place for a long time, remember? They don't age, so it would look weird. I don't remember the actual year they found the Cullens, but I think it was at least a few decades ago. They couldn't possibly have been living in Forks looking like they were all in 17 or 18 for a few decades. They would have to be fairly new to Forks by the time Bella showed up. They could have been near the Denalis, or in any other cooler, less sunny place. They've lived in NY before--when Carlisle turned Rose and when they left Forks n NM. They could have been in NY.
Top
Post Reply
256 posts